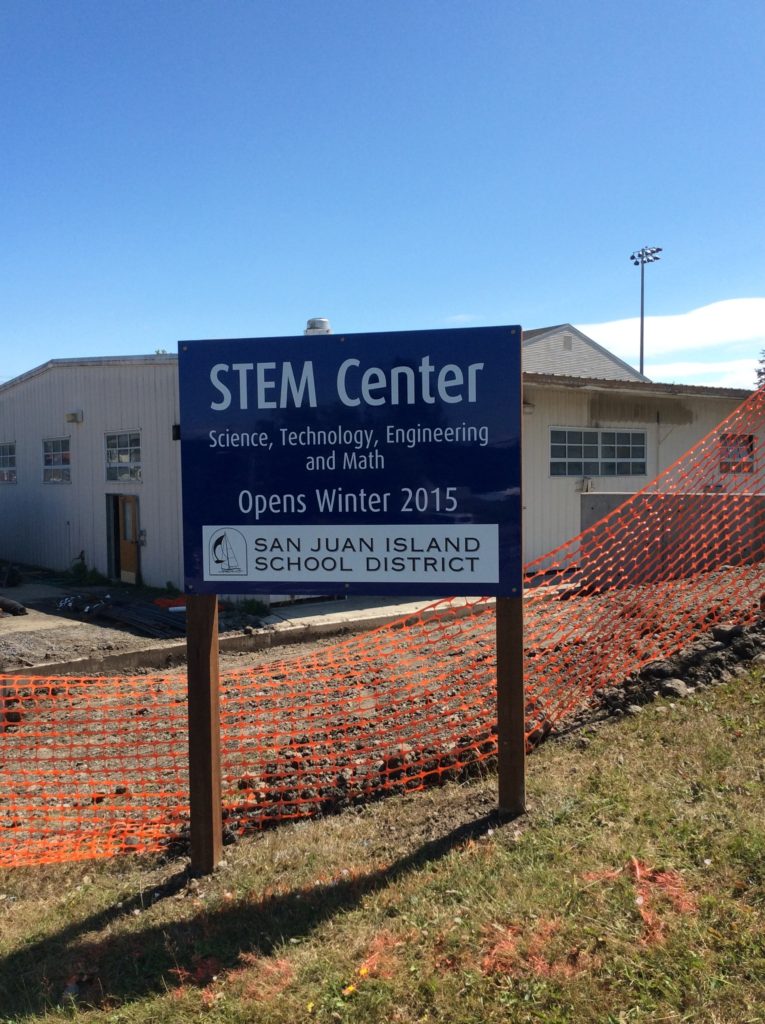 Science. Technology. Engineering. Mathematics…. all in one place. That’s what STEM stands for, and the building is scheduled for opening in the fall semester 2015.

In summer 2013,  the Washington State Legislature granted the San Juan Island School District a $1 million dollar capital gift to renovate the vocational/technology building behind Friday Harbor High School. The project is on schedule for a 2015 opening – here’s more about the program:

The San Juan Island School District has been named one of five STEM Lighthouse Districts by the State of Washington via a state-wide competition.

The Lighthouse designation acknowledges that these districts have developed the best  STEM programs in the State. As a STEM Lighthouse, our mission will be to serve as a resource and example of best practices in science, technology, engineering, and mathematics instruction to all other districts, especially small districts for which quality STEM programs are especially challenging.

School Board member Jack McKenna, author of the District STEM resolution, commented, “While we have been recognized as one of the top districts in the nation, the fact is that even the best American schools continue to prepare graduates for yesterday.  Through the further development and implementation of STEM curriculum on San Juan Island we can begin to carefully move our teaching and learning in the right direction.”

Former engineer Larry Wight, STEM teacher and author of the successful application, continued, “Those of us that have been pushing for STEM here have been frustrated at the slow pace when we compare ourselves to larger districts with more resources. But now, this award recognizes that among small districts, San Juan Island is actually a leader in STEM innovation and implementation.  It is simply harder in a small district to find the necessary resources.

“I am so grateful that Superintendent Thompson strongly encouraged me to write the proposal. The award affirms that our efforts are on the right track, and the grant will allow us to move forward without having to cut other worthwhile programs.”

The term STEM is shorthand for Science, Technology, Engineering and Mathematics, and was originally used by immigration officers to fast-track qualified foreign applicants for entry into the American workplace.  The term has now become a focus for educators, elected officials, industrialists, professional associations and unions intent on bringing the skills and knowledge of our graduates in line with the high paying technical jobs in the modern workplace.