The San Juan Public Schools Foundation congratulates the Friday Harbor High School Aerospace Design Team for their outstanding win in the Northwest Semi-Finals of the International Space Settlement Design Competition (ISSDC).  The Foundation is proud to sponsor the team’s trip to compete for a World Championship at ISSDC, held at NASA’s Kennedy Space Center in late July.

We are pleased to support the Aerospace Design Team and wish them the best of luck in this tremendous opportunity.  Way to go: Arlo Harold, Lucy Urbach, Joely Loucks, Max Mattox, Brandon Payne, Evan Foley, and Mr. Daniel Garner!

Over the weekend of April 28-29, the Friday Harbor Aerospace Design Team, known as Island Orbital Technologies, competed in and won the first ever Northwest Semi-Finals of the International Space Settlement Design Competition (ISSDC). This event, held at the Museum of Flight at Boeing Field, included students from six regional high schools and is part of a worldwide competition which uses aerospace industry simulated scenarios to engage high school students in engineering design and management. 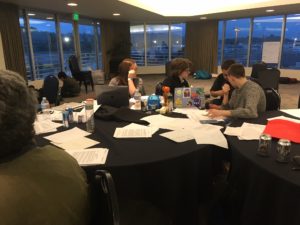 At the competition, the FHHS team joined forces with students from Raisbeck Aviation High School, received a Request for Proposal at noon Saturday, and had until 8am Sunday to produce a 50-page proposal and create a design brief for judges. Immediately, FHHS engineers took leadership roles, with Arlo Harold heading Structural Design and Lucy Urbach heading Human Factors. Joely Loucks and Max Mattox joined Urbach in Human Factors and Brandon Payne and Evan Foley comprised the Automations design department. Working non-stop for 20 hours straight, the team produced a design for a lunar outpost that could safely house up to 400 residents by placing the community in a lunar lava tube. They made a positive impression on the judges by repurposing lightweight shipping containers to create pressurized volumes for community centers and laboratories.

The FHHS team distinguished themselves further in the design brief when Harold, Urbach, and Payne presented the entirety of their sections and then were joined by the rest of the team in defending their proposal in a 50-minute question and answer period from the judges from NASA, Space X, Boeing, and University of Washington.

Upon winning the semi-finals, the judges let the team know that their design proposal was the finest they had seen in their thirty years of semi-final competitions, a great testament to the tenacity, preparation, and collaboration skills of our Friday Harbor students. Judges specifically mentioned the clear and plausible structural design (Harold), the incredible detail of the resources needed to keep humans alive and well (Loucks), the recreational activities available to residents (Mattox), the efficiency of robotic assistance (Foley), and the impressive presentation skills of Payne and Urbach.

As an award, the team will now compete for a World Championship at ISSDC, held at NASA’s Kennedy Space Center in late July.